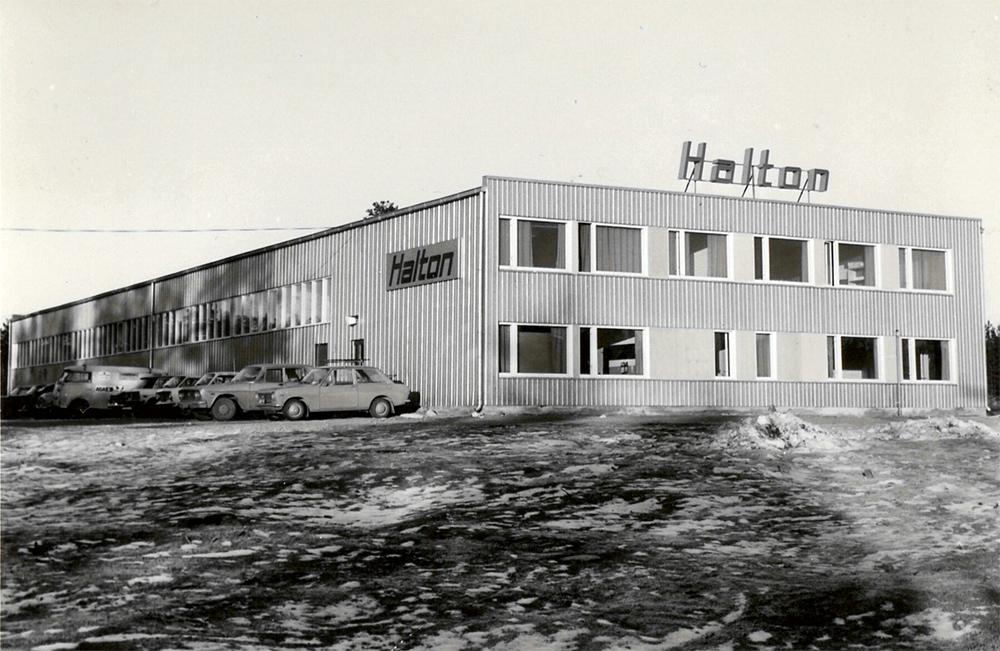 Adding Value to Customers Since 1969

Since its foundation in 1969, Halton Group has grown from a small national company to a leading global business in indoor climate technology. Halton’s competitiveness is based on customer-focused products and solutions for a selected range of demanding applications. Technologically and locally focused operations together with international expansion have been the driving forces of the family-owned company.

To celebrate the first half-century of its operation in 2019, Halton published an anniversary book:

The founder of Halton Group, Seppo Halttunen, had the vision of an international company with its own products, production, R&D, and a good reputation among customers. The company’s operations were based on strong customer orientation from the very beginning. In the early days, store furniture accounted for a large part of the company’s operations. This ensured the continuity of the business and laid the foundation for long-term success.

Halton initially grew in Finland, but soon began exporting. International success was first achieved in the Nordic market, with the company expanding its operations to Central Europe and beyond soon after. In 1978, Halton founded its first foreign subsidiary, Oston Ltd., which manufactured checkout counters for stores, in Canada.

Halton’s net sales grew profitably by an average of 30% a year throughout the 70s. However, the company’s future was already thought to lie in indoor air products and it began making major investments in R&D.

The new decade brought new ideas and markets. The North American store furniture business continued to grow. However, a new business focusing on recycling systems was launched in Finland in 1982, and the domestic store-furniture business was sold three years later.

The key factor in Halton’s international growth was probably the establishment of the first R&D center focused on indoor air products, the Halton Innovation Hub, in Kausala in 1984. This 10 million markka investment was a major risk for a company with annual net sales of 30 million markka. However, the center convinced customers of the excellent quality and functionality of Halton’s products, and the company expanded rapidly. Sales offices that had been opened in Sweden and the United States a couple of years earlier were joined by sales operations in Norway (1984), the Netherlands (1985), the United Kingdom (1987) and Denmark (1988).

1989 was an important year in many ways. Halton bought a French indoor air company, Anemotherm, and started building a new factory in Béthune. In the same year, US operations at the new production facility were expanded, and operations launched at new factories in Lahti and Heinola.

Halton received numerous accolades during the decade, the most significant of which was the Export Prize awarded by the President of the Republic of Finland in 1988.

Rapid internationalization continued. With the acquisition of Anemotherm, Halton entered the vast internal market of the European Union. Halton continued its expansion, entering Belgium in 1991 and establishing an air conditioning sales unit in Germany in 1992.

In 1996, Halton began operating in Asia by setting up a joint venture in Malaysia with a local company, Hamodal. Sales were launched in Moscow in 1997. In the same year, Halton decided to focus on indoor climate solutions, building a factory in Scottsville, Kentucky, USA. A research and development center was opened alongside the factory in the following year. The recycling business was sold and the store furniture business became an independent company. In 1999, Halton founded a sales office in Warsaw.

In 2000, Halton acquired Acti-Com AS in Norway and CanVent Co. in Canada. An indoor air technology development project was launched in cooperation with the National University of Singapore (NUS) in the following year.

In 2003, Halton acquired Clairia, a leading Finnish manufacturer of filters. Halton began factory production in China in 2005. It acquired a significant competitor, Vent Master, in the same year. This acquisition strengthened Halton’s position in the UK and North American markets, in particular, complementing its expertise in the commercial kitchen sector.

In 2006, Halton strengthened its Foodservice business — which specializes in indoor air in commercial kitchens — and its position as a leader in international markets and technology, by acquiring Wimböck, a German family-owned company. This acquisition provided Halton with a strong market position in Japan.

In 2011, Halton acquired Current Energy Inc., a US producer of automation and remote management products and solutions. Halton entered the world of IoT solutions with this acquisition.

Halton made major investments in its factory and product development operations elsewhere during the decade: Its Hungarian factory opened in 2011, the Lahti plant extension was completed in 2015, and a new expansion of Halton’s Reit im Winkl plant in southern Germany was inaugurated a couple of years later. In 2018, the renovation of Halton’s Béthune plant in France was completed, including a local R&D center and a demonstration kitchen showcasing the company’s latest technologies.

To sharpen its focus on developing and resourcing core areas of its business, Halton sold its Clean Air filter business in 2015 and acquired Air Scrubbers, a U.S.-based company specializing in air purification.

Acquisitions continued in 2017, with Halton buying Diffus’Air, a French supplier of turnkey indoor air solutions, to complement its French operations. Miwo, a Dutch company that delivers similar overall solutions, joined Halton in 2019. In the same year, Halton became a minority shareholder in Flamgard-Calidair, a Welsh company specializing in advanced fire and shutoff dampers on the global market, and opened sales units in Kazakhstan and Kenya.

In addition to acquisitions, Halton has established strategic partnerships to promote the integration of its technologies with other leading solutions in its target environments. Halton teamed up with two business partners to introduce the InoroomTM turnkey operating theatre on the Finnish market in 2015. In 2017, the company began a strategic partnership with Welbilt, a leading manufacturer of commercial kitchen equipment. Halton continues to be open to similar partnerships in its various business areas.

As it celebrated its 50th anniversary in 2019, Halton opened further production facilities in the United States and China.

The 2020s began with good prospects of growth, but the global economy was soon engulfed by an unprecedented crisis due to the coronavirus pandemic. Like other companies, now and again Halton had to adjust its operations to the new situation. However, the company’s strong balance sheet and cash position have ensured business continuity, and even investments, during this exceptional year. In addition, Halton’s extensive international operating network and diversified markets have helped the company surmount the worst months, with some manufacturing units being able to support each other.

The pandemic has created opportunities as well as a crisis. Indoor air has been highlighted in a new way. Its role as a safety factor in indoor environments and in safeguarding the continuity of indoor activities is sure to grow further as societies learn to live with the new, prolonged situation.

During 2020, Halton has launched new solutions that assist with the purification of local indoor air, and highlighted the potential of solutions — previously targeted at hospitals — in other indoor environments, as indoor air quality requirements have tightened in practice.

Halton will continue to develop its globally unique indoor air expertise and range of solutions. We aim to grow through acquisitions and partnerships, as well as organically. We will continue growing our business both geographically and by introducing an even wider range of technologies to promote a holistic end-user experience and take people’s wellbeing and safety to the next level in indoor environments.