This investment is a continuum of the factory’s environmental actions that started several years ago. Back then, the factory began to choose suppliers that produced renewable energy to achieve lower emissions. The factory began using renewable electricity as an energy source and purchased district heating from a local heating plant that used biomass as fuel. With all these changes the CO2 emissions from the used electricity and heating decreased – today the amount is only about 7 tons per year.

The timing for the solar power plant investment is considered very good at Halton. Investment in the photovoltaic system has been prepared for a few years; the plan was realized at the beginning of 2022. The timing hits the right spot because the war in Ukraine has raised instability in the electricity market and increased electricity prices.

”We are happy that we were able to implement this new energy source now because strongly fluctuating electricity prices are making it challenging to operate profitably at the moment. The high level and variability of electricity prices make it difficult to estimate the costs of production,” states Heinz Ritzer, the CEO of Halton GmbH.

Halton chose Abel ReTec to supply the solar power plant. The order included several challenges for the supplier. ”For naming some of the challenges, the tight schedule as the panel installations had to take place before the winter sets in and the well-known snow load of Reit im Winkl in winter,” says Klaus Klughammer, site manager for solar power systems. ”Also, connecting the system to the company’s electricity network had to be carefully planned and implemented. And the fire protection regulations and especially the distances to the fire protection walls under the system had to be taken into account, as well as many technical details.”

Many potential obstacles were overcome by careful preparation. This included the assistance of an independent inspector requested by Halton’s property insurer. ”This inspector was an asset for us because it enabled us to have another competent specialist at our side. It’s difficult for us as laypeople to make the right decisions in this area, where innovations are constantly being added,” explains Halton employee Georg Weber, who oversaw the PV system through to final acceptance. 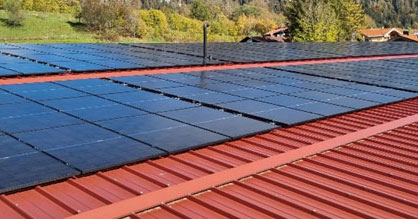 In addition to saving the environment, the investment also made economic sense. At the current price of electricity, producing solar electricity saves around 30,000 euros per year. The peak power of the installed solar power system is 100 kWp. The total area of the solar panels is 520 m² and consists of 250 modules. The combined electrical energy capacity of the panels per year is estimated to be approximately 105,000 kWh. The factory can use about 75% of the annual electricity production of solar panels, which means that 33% of the factory’s electrical energy needs can be covered by solar electricity. The rest of the electricity  that is produced is sold to the local electricity grid.

The Reit im Winkl factory can be said to be carbon neutral in terms of electricity and heating. The electricity sold to the local electricity grid reduces emissions from general electricity production by about 16.5 tons. In the future, part of this electricity can also be used to charge the batteries of the company’s electric cars.

Over the past few years, Halton has focused on keeping production emissions as low as possible. The corporation has invested significantly in the energy efficiency of its production facilities and in renewable energy sources. The investment in Reit im Winkl is an excellent example because it shows that investing in sustainable development is financially profitable and reduces CO2 emissions.

Reit im Winkl’s solar panel power plant investment won’t be the last of its kind at Halton; the corporation is planning to implement solar power plants at several other locations.

Blog: Wellbeing on a Warming Planet

It’s summer in Helsinki. The temperature is 30 degrees. After...
Read more
News

This is Halton’s 4th report. Our efforts continue to focus...
Read more
News

In recent years, the GCC area has seen a huge...
Read more
News