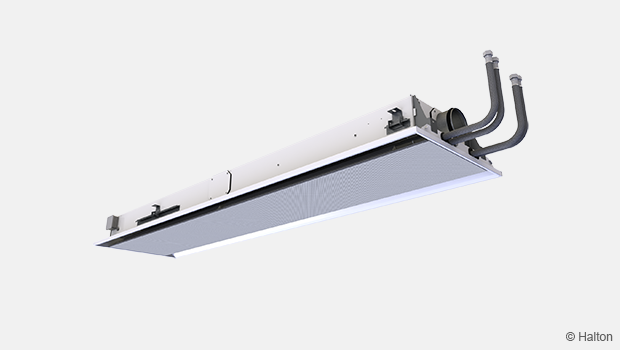 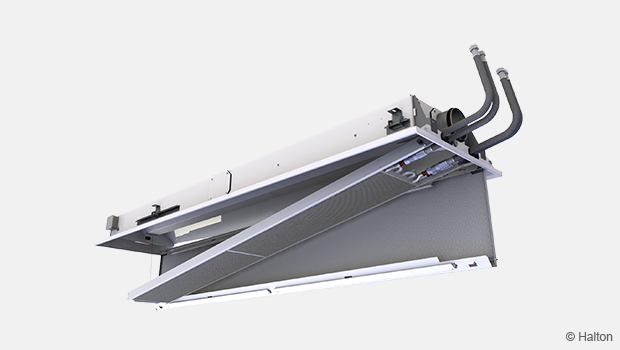 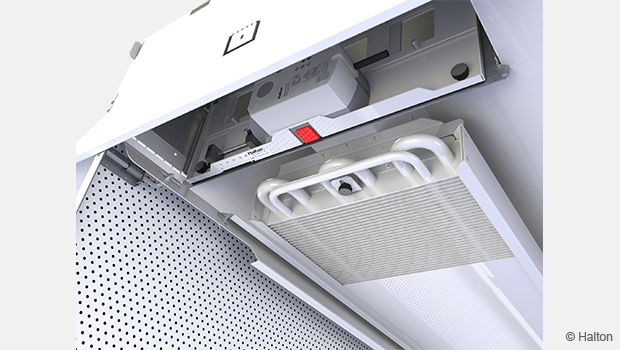 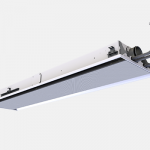 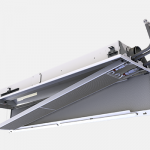 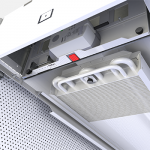 The Halton Vita Patient Rex hygienic chilled beam is designed to be installed flush with a suspended ceiling. 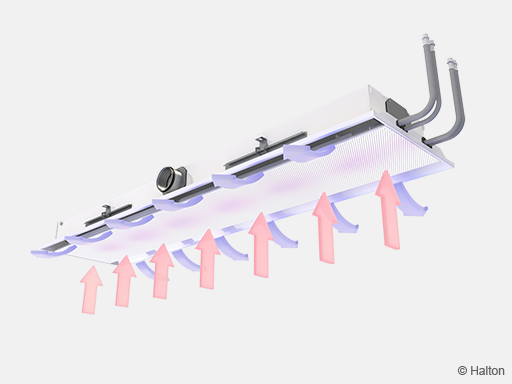 The HVC damper is divided into sections  (Pos.1-3) to enable the adjustment of conditions in different parts of the occupied zone.

It is recommended to design the chilled beam in the normal position in order to allow both throttle and boost functions during the building’s life cycle.

Airflow rate adjustment is needed when the use of the space is changed and there is need to adapt the supply airflows. Airflow rate can be adjusted either manually or automatically, on the basis of demand, with a motorised control damper.

A chilled beam equipped with HAQ manual air flow rate adjustment can be retrofitted to motorised version for demand based ventilation .

The appearance of different units with constant, adjustable, or variable airflow – is identical.

The Halton Air Quality (HAQ) control unit’s position and the selection of chilled beam nozzle size allow adjustment of the primary air flow rate in the space. The separate air flow adjustment damper installed in the duct branch ois used for balancing the air flows in the ductwork.
When a motorised air quality control (HAQ) unit is used, the maximum and minimum air flow rates are adjusted with the stroke limiters of the damper.

The primary airflow rate of each beam is adjusted using the Halton Air Quality control unit during the installation and commissioning. There is no need to change or plug nozzles of the chilled beam. 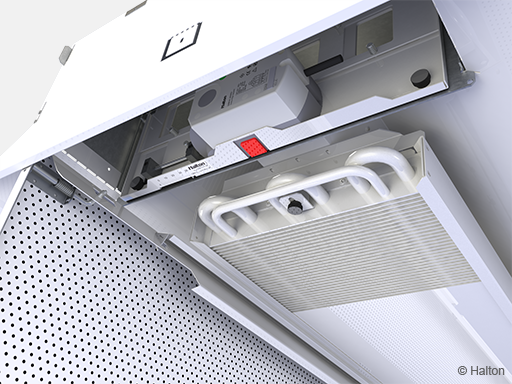 Air quality control for a room space can be arranged using, e.g., a CO 2 sensor when room air temperature is controlled separately by regulating the water flow rate. Alternatively, a temperature sensor can be used for air quality control, with the airflow rate modulated in the first sequence and, if the temperature exceeds the set point, the water valve starting to open in the second sequence.

The system package should be selected in the VPR product order code when the product is intended to be equipped with Halton Vita VRA room automation system.

The package consists of a controller unit and a user panel used to adjust the ventilation airflow, room temperature, and lighting in a hospital patient room. 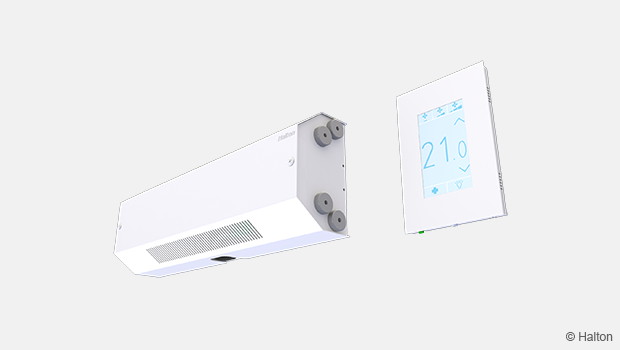 The controller unit is installed on top of the beam and the user panel on the wall. 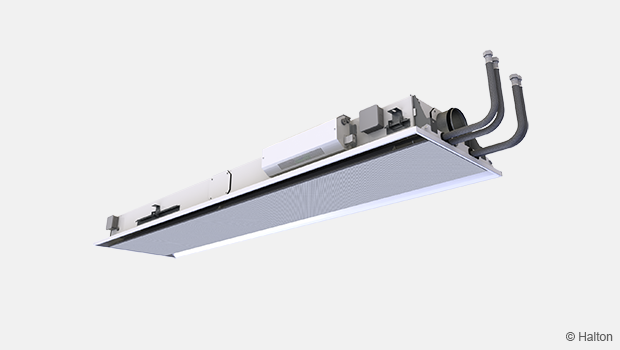 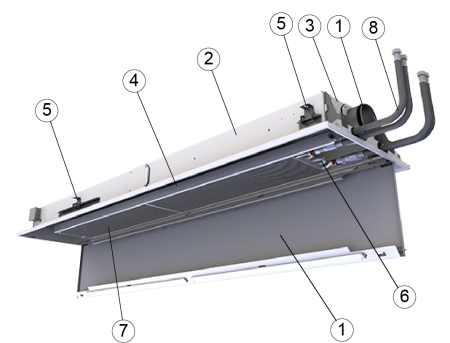 ¤) The antibacterial performance of coil coating used in Halton Vita Patient Rex has been tested in independent microbiological laboratory (in reference to standards ISO 22196 and JIS Z 2801) with following result:

>99%(24hours) Reduction of many common bacterias* 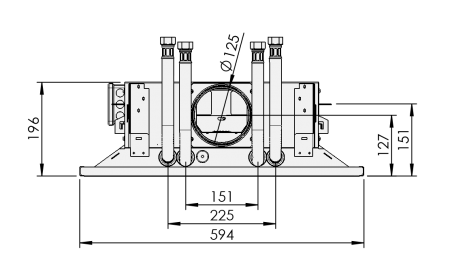 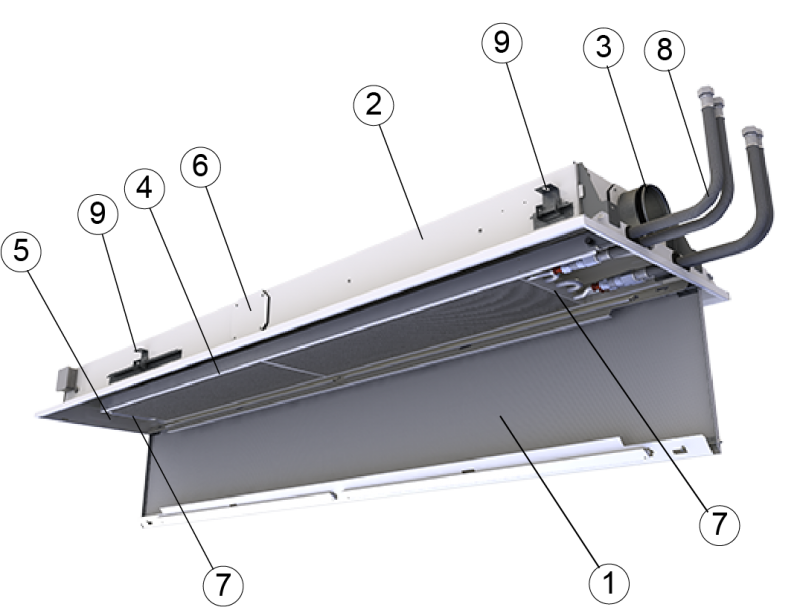 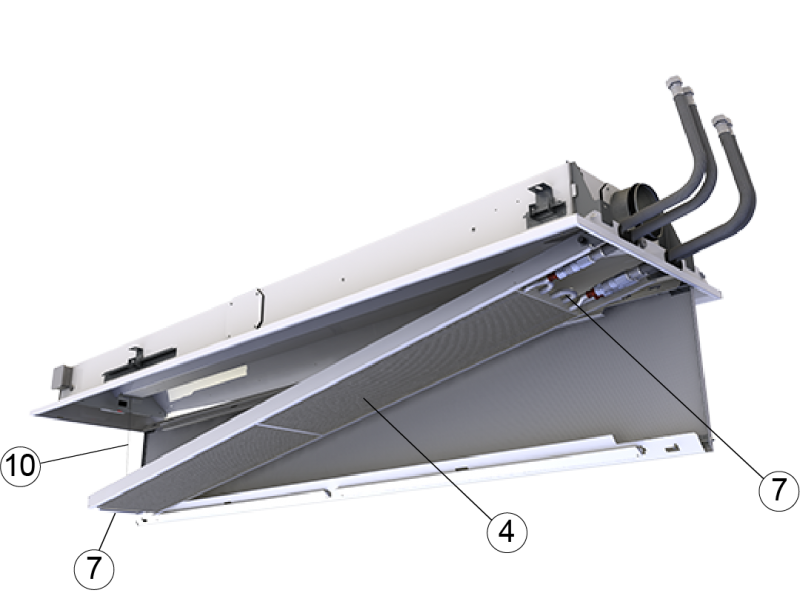 Open the front panel (1.) of the Halton Vita Patient Rex.

The hygienic active chilled beam for room ventilation, cooling and heating is especially designed for hospitals and other environments with high hygienic demands. The chilled beam has an integral recirculation air path through the perforated front panel. The induced room airflow rate is manually adjustable via three setting positions without influencing the primary air supply flow rate. .

The primary airflow rate shall be adjustable over a wide range without plugging or changing the nozzles via a supply air unit integrated into the chilled beam. Adjustment of the airflow rate do not have any affect on induced airflow rate through the coil nor the coil cooling or heating capacity when static chamber pressure is kept constant (optional).

The chilled beam unit equipped with a manually adjustable airflow damper are able to be retrofitted with a motorised airflow control damper unit.

The cooling/heating coil is hinged from one end to enable lowering of the coil from other end to enable cleaning access to both bottom and top side of the coil and to internal surfaces of the chilled beam that are covered with the coil during normal operation. The coil edges are protected from damage during cleaning with side covers and the opening end of the coil is secured with stopping mechanism to reduce the decay of the coil.

The cooling coil is connected to piping with a flexible pipe connection from the factory.
(Option) The pipe connections shall be equipped with quick connections to enable total removal of the coil.
The front panel is fully perforated with round holes with the diameter of 2 mm. The finned cooling/heating coil has minimum of 5mm space between the fins.

The position of the duct connection is changeable without the use of any special tools.
The frame, front, and side panels is made of galvanised steel plate.
All visible parts and internal surfaces of the beam casing shall be white, painted to RAL 9003 or RAL 9010, (20% gloss).
The casing is enclosed and the pipe-connections covered to prevent ingress of the air from the ceiling void into the room airflow.

The coill is thoroughly power-coated with white antibacterial paint.
All joints are soldered and factory pressure-tested.
The pipework s maximum operation pressure is 1.0 MPa.
The active chilled beam has an airflow adjustment damper as an option and a measurement tap to allow airflow measurement.

As an option, an exhaust valve can be integrated into the chilled beam.

The Halton Vita Patient Rex hygienic chilled beam is especially suitable for ceiling mounting running parallel to exterior wall of the room. When selecting of the chilled beam orientation, the location of the supply air and water circuit connections are taken into account. 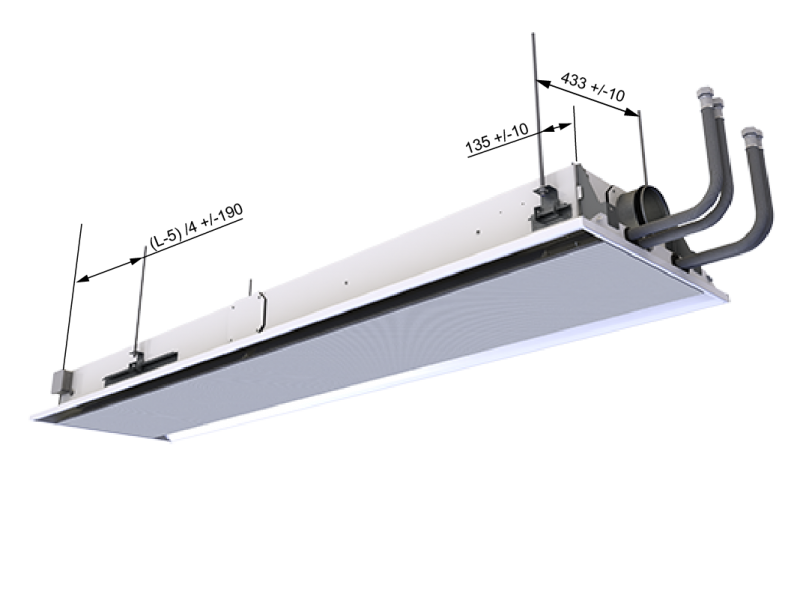 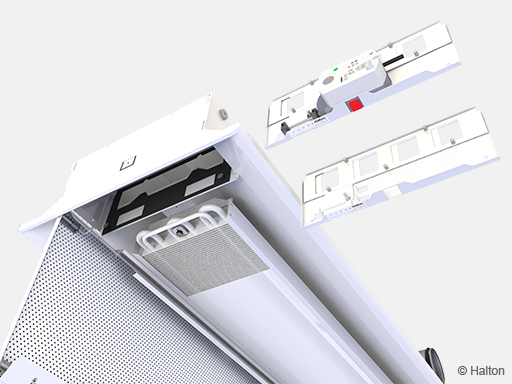 Balance the water flow rates of the Halton Vita Patient Rex chilled beam with adjustment valves installed on the outlet side of the cooling and heating water loops. The cooling capacity and heating capacity of the chilled beam are controlled by regulating the water mass flow rate. The water mass flow rate can be controlled by using an ON/OFF valve or a two- or three-way proportional valve.

Connect a manometer in the measurement tap and measure the static pressure in the Halton Halton Vita Rex hygienic chilled beam. The airflow rate is calculated according to the formula below.

Define the position of Halton Air Quality control (HAQ) in millimeters that correspond to airflow rate at the actual chamber pressure level. 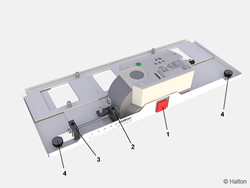 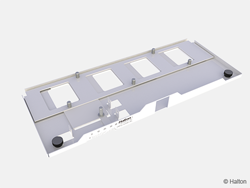 Adjustment of the airflow range in variable air flow applications

The actuator can be controlled from this point on by using a 0…10VDC control signal. (0 VDC=min.position, 10 VDC = max. position).

Other options and accessories

Built-in flexibility for easy and fast adaptation of operation during...
Read more
Product

The compact size makes the product ideal for hotels and...
Read more
Product